Feeding the Soul: Hiba Jameel trained to be a nutritionist but painting sated her Featured 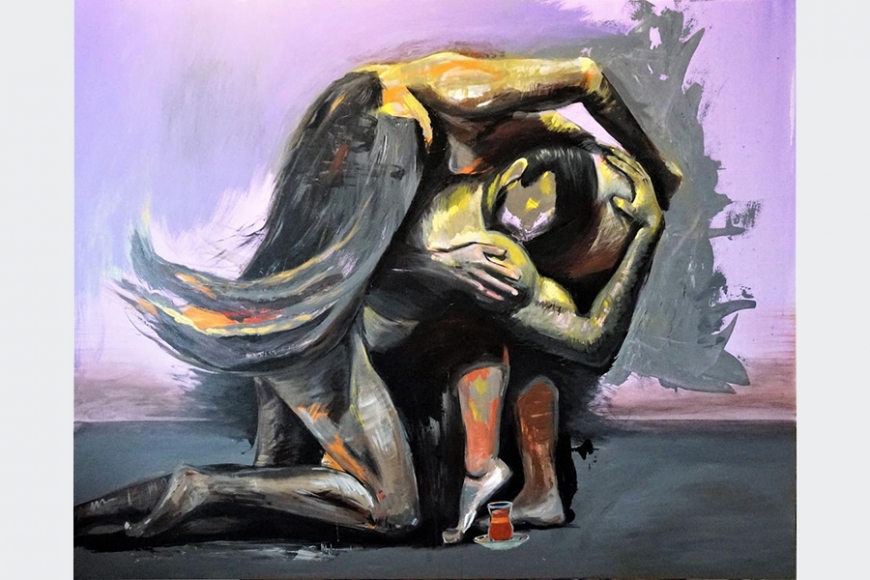 The role art plays in Hiba Jameel’s life goes well beyond the finished piece on the canvas. Art has helped her heal. It’s spurred conversation. It’s what she looks forward to at the start of each day. Art is a lifelong passion Jameel is able to devote more time to now that she’s pressed pause on pursuing a career as a nutritionist.

“I needed to become the artist that’s in my head,” said Jameel. “I wake up, go to sleep all I think about is paintings, art, applying to shows, creating more, getting my work out there.” 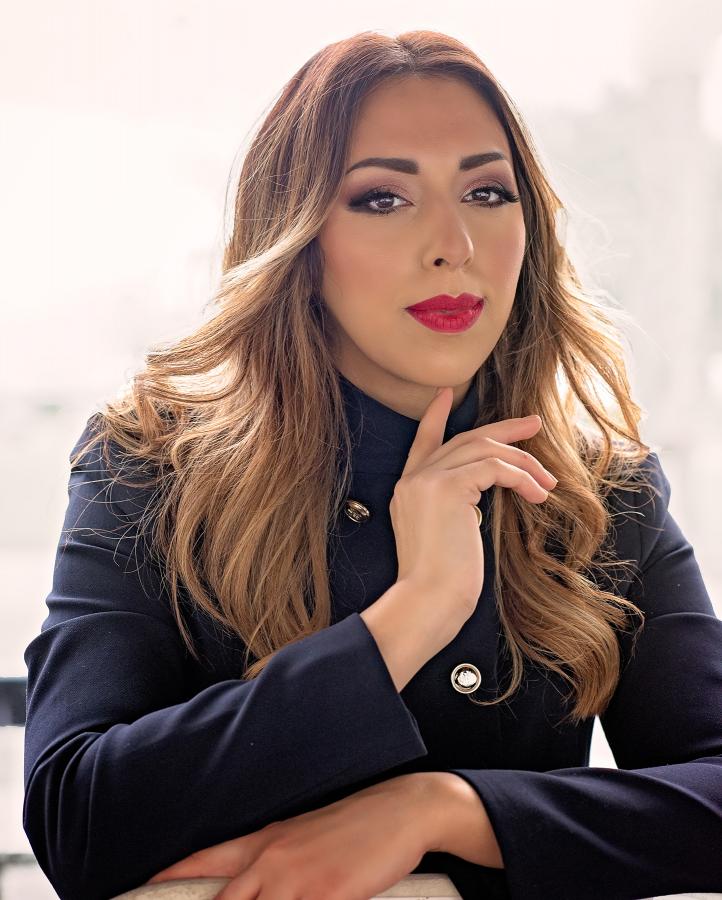 View the embedded image gallery online at:
https://suleyera.com/press-digest/feeding-the-soul-hiba-jameel-trained-to-be-a-nutritionist-but-painting-sated-her.html#sigProId873d4f9bc3
Jameel is creating a captivating portfolio of figurative paintings and narrative works centering childhood experiences. In “Playing with Shrapnel” a young Jameel is crouched and picking up a bomb fragment that will later become a sculpture. A billowing cloud of turquoise smoke rises well above her head in the distance. Her eyes are obscured. Instead, the audience gets a glimpse into what she sees at night as explosions go off all around her.

As a child, Jameel lived in Baghdad, Iraq. She was 8 years old during the Gulf War and vividly recalls the difficulties her family faced.

“That was a really tough time in my life because I remember feeling, yeah, I could die at any second. This could be us,” said Jameel. “As a matter of fact, at night we would sit in the corners. Everybody would gather in a corner because if they bombed your home the corners don’t fall.” 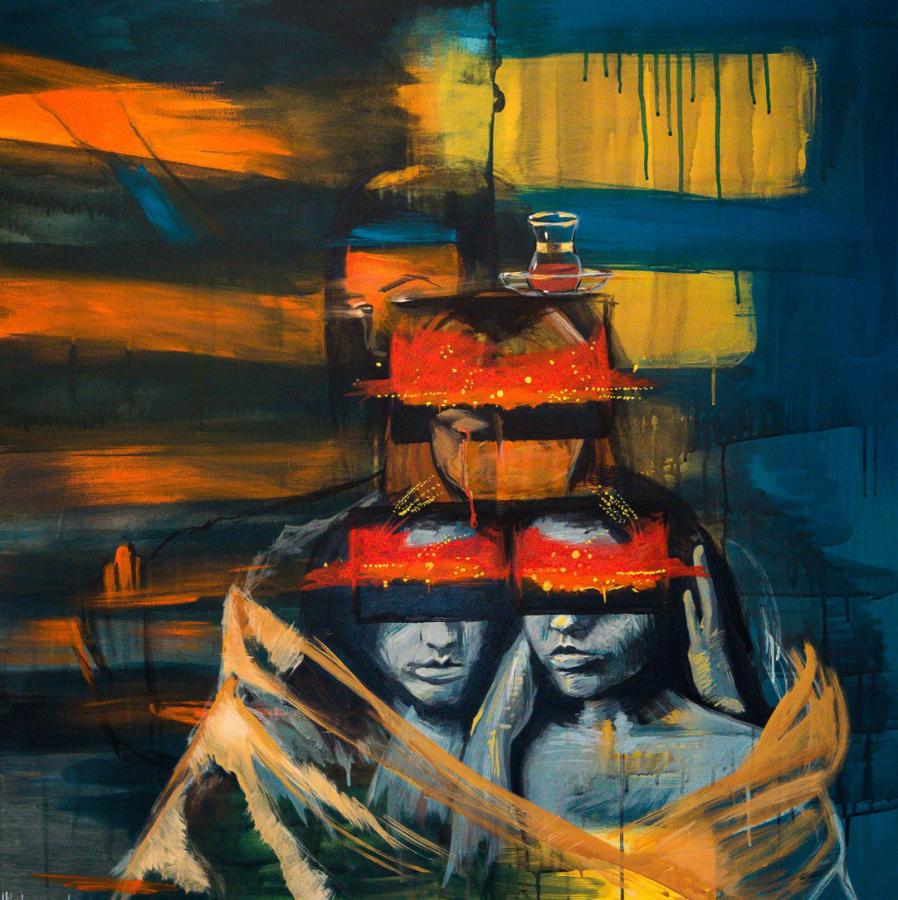 “Bebe, Sister and I in the Corner" by Hiba Jameel, acrylic on canvas

To help ease her fears Jameel’s family told her the bombs lighting up the sky looked like the Atari game she played. As the bombing raged on, Jameel remembers the smell after the United States military targeted a bunker in Baghdad then-president Saddam Hussein was thought to be staying.

“Because he wasn’t there, people got stuck, they couldn’t leave and they just burnt. They burned to death,” said Jameel. “That was pretty tragic.”

During the day, Jameel remembers waiting in line to get water and gas for the heaters.

Food wasn’t always a guarantee either. Some nights she went to bed hungry. She also watched her grandfather’s health decline. It’s an understatement to say the war had a significant impact on Jameel. In 1994, she and her family fled to Jordan, then to Syria. Jameel’s mother was determined to be relocated to the U.S. and strongly believed in the American dream. By 1998 her mother’s wish came true and the family moved to Michigan. They eventually settled into life in San Diego.

Despite a love for art and a declaration that it was the career she wanted to pursue, Jameel chose the medical track to make her mother proud. She studied biochemistry and cell biology at University of California San Diego. After graduation, she worked as a dental assistant and got married. Rather than go to dental school, she enrolled in graduate school at Tufts University in Massachusetts to study nutrition science. While in school Jameel gave birth to her now 4-year-old daughter and her mother was diagnosed with an aggressive breast cancer. Jameel says it went from stage zero to four within a year.

“That was the hardship of my life,” said Jameel. “We were grieving her since the minute she got diagnosed. We knew she was going to leave and it was hard. She was fighting. My mom loved life. She was fighting. She fought it tooth and nail until the end.”

In 2016, her mom passed away. Jameel took some time off and by the next year she finished her studies. A short time later, an interactive art event she participated in awakened her desire to pursue her artistic dreams. She connected with Art/Not Terminal to show in their gallery and now she’s on the board of directors.

Rather than find a job related to one of her degrees, Jameel decided to follow her passion. She described it as having a pressing need to see what opportunities were possible in the creative world.

Since becoming a full-time artist, Jameel has exhibited locally and her painting “I Really Don’t Care Do You” won an international art contest held by a UK news group called  the Rapid Response Unit. In it, Saddam Hussein is seated at a table while President Donald Trump stands next to him. Several children surround the two men, including a depiction of a widely-photographed little girl who was separated from her family at the border. It’s a jarring painting. Her point of view is explicit. The painting is an evolution of “The Gulf War was a Piece of Cake,” which represents one of Jameel’s childhood memories. 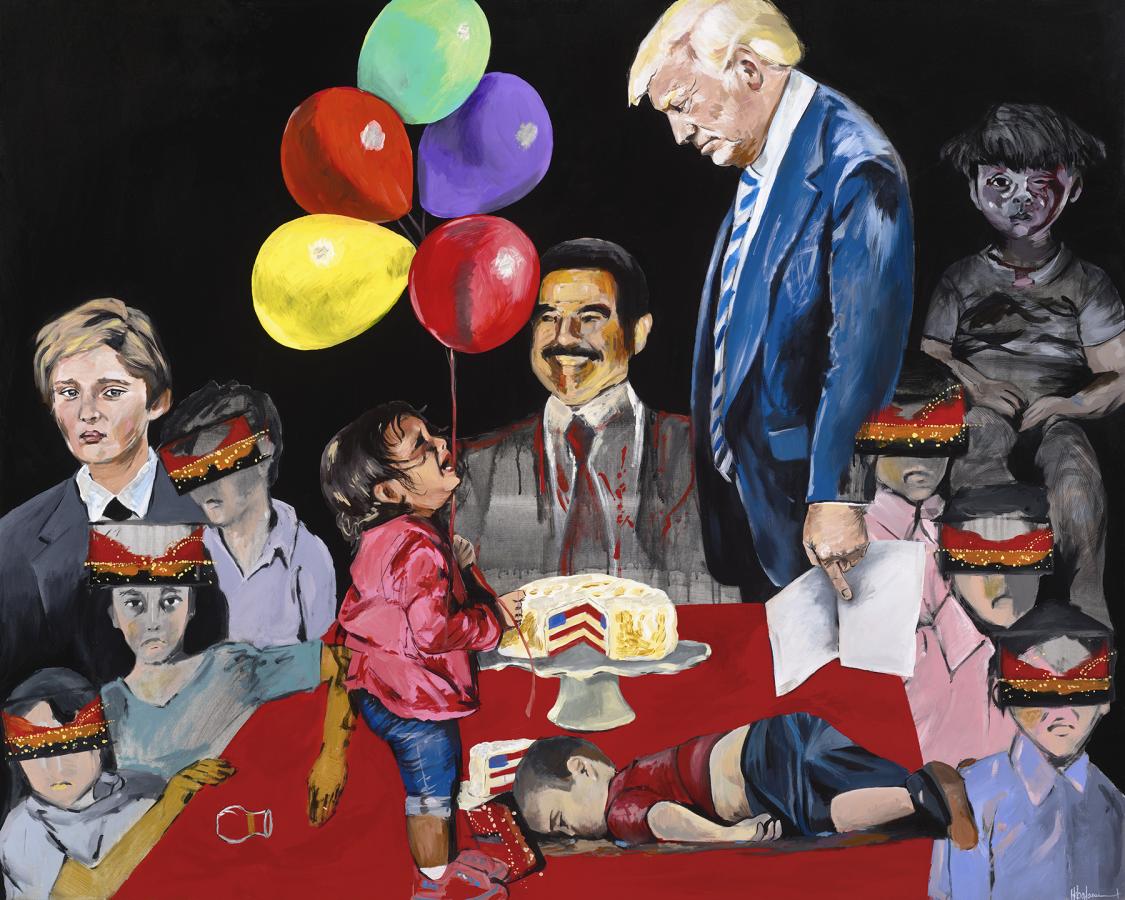 "I Really Don't Care Do You" by Hiba Jameel, acrylic on canvas

“We were a starved country. Every year for his birthday he would have a gigantic birthday bash on live television. He’d block all the other programs,” said Jameel. “You turn on the TV, that’s the only thing you see is him celebrating with all these kids wearing beautiful clothes eating a lot of food and cake.”

When the Trump administration began separating children from their parents at the border, it deeply affected Jameel. She sees similarities in the tactics used by both men on the population. Painting “I Really Don’t Care Do You” helped her process the flood of emotions that reemerged.

Just as her work is candid, so is Jameel. She speaks of her past with ease and is also moving toward healing her personal wounds. Soul searching led to a reconciliation with her father after 25 years. She didn’t want resentment to block good things from coming into her life. She no longer wanted to produce art from a place of pain.

“I have used art as a way to heal my whole life and it’s good. But I didn’t want to continue. I’ve evolved,” said Jameel. “I wanted to create art from other aspects and I wanted to see what kind of artist will I become once I solve these internal conflicts.” 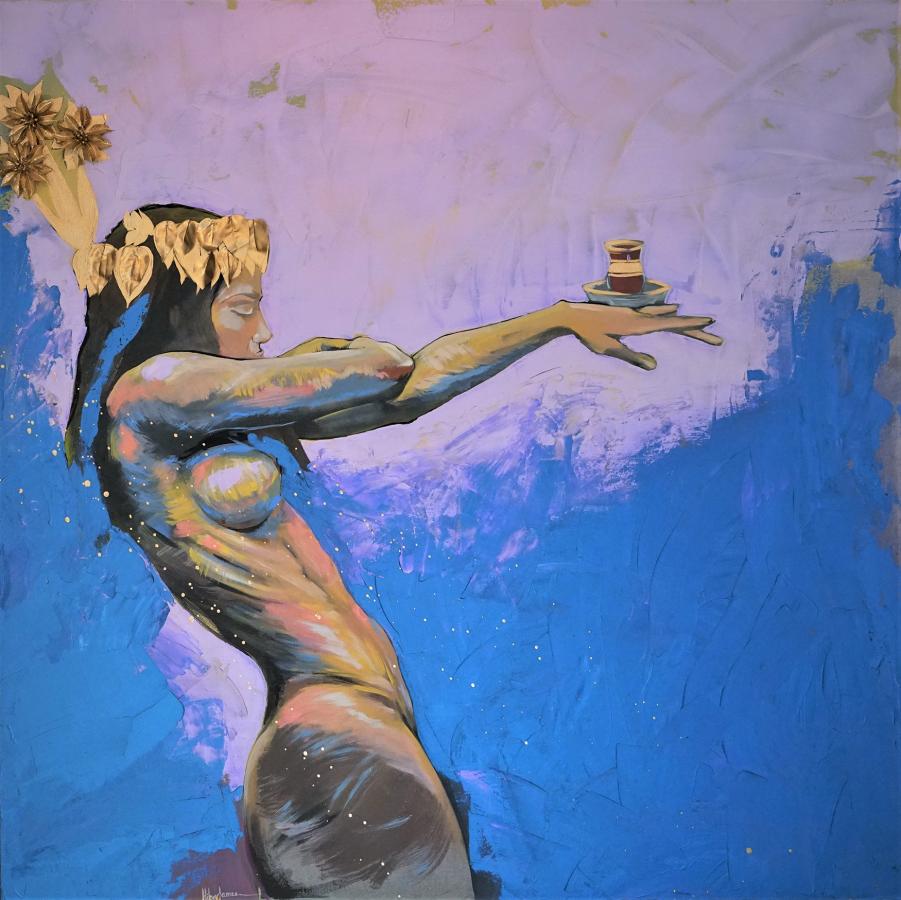 “Puabi and I" by Hiba Jameel, acrylic on canvas

When asked to name artists she admires Jenny Saville is first on the list without hesitation. Saville is a contemporary British painter known for large scale nudes of women. Jameel loves how she portrays all types of figures in her work and eagerly pulled up Saville’s Instagram account to point to examples.

“She’s focusing on something other than vanity,” said Jameel. “On our truth as humans, our existence. What combines us, what brings us together.”

As Jameel continues to perfect her craft and work on various projects, she knows where she’s headed — achieving the level of success comparable to Saville, “I want to get to this level of greatness. I want to dive harder into my art and create even more beautiful work.”

Lisa Edge is a Staff Reporter for Real Change News, covering arts, culture and equity. Have a story idea? She can be reached at lisae (at) realchangenews (dot) org. Follow Lisa on Twitter @NewsfromtheEdge

More in this category: « Suley En Vogue Summer Bash to jam in Monroe