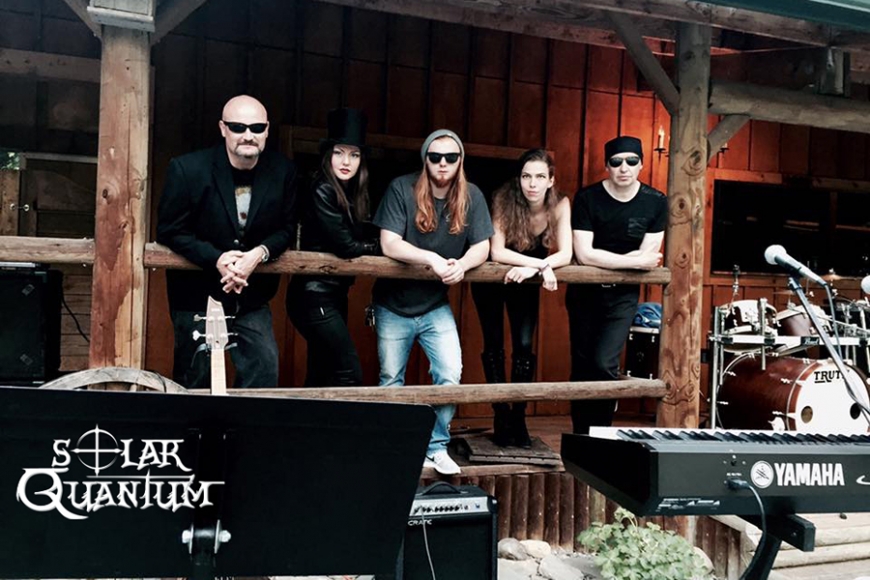 Light doubles as the band's keyboardist. She is originally from Kyrgyzstan, and her musical background can be traced back to her childhood. When she first arrived in the U.S. in 2011, she started performing with the Juliana & PAVA vocal ensemble. The group performs ancient Russian folk songs and uses traditional instruments, such as the Russian hurdy-gurdy and balalaika.

Event producer and Solar Quantum guitar player Gene Aaron said each member brings a unique training, musical history and influence to the group. He stepped in, then out of the industry more than 20 years ago. He helped form the Russian rock band Helios in 1991, and left after the debut album “The Mirror” aired on MTV Europe in 1993.

The name Solar Quantum is a continuation of the theme established in his previous group. He said he wanted to carry on the idea of “the essence of life on earth” with the music. Things started to come together 2 1/2 years ago, when Aaron, Light and the group's violinist, Emily Bouvier, began collaborating. Bouvier is trained in classical rock, loves dubstep and plays with former Heart band member Roger Fischer. This winter they added a drummer and bass player to round things out.

Aaron said members are committed to making a name for themselves. He is the one that usually heads up composition, but everyone gives their input. He said it can take about 15 minutes to finalize the lyrics, but weeks to perfect the piece.

“Little details can make it or break it, especially with this style of songs because arrangement is a big part of it,” Aaron said.

He said the group is excited to perform at the Blue Boy Golf Course in August. The event will be McDermott's first time out in the Sky Valley, but he is familiar with Washington and the Puget Sound region. The beginnings of Lotus Crush are rooted in the Seattle area, which he refers to as a second home.

“I don't think you can separate Seattle from what I am doing very easily,” McDermott said.

His first big gig was as a singer in the Aberdeen, Scotland-based band Driveblind, which he left around 2008. After that he and a former member of Candlebox built up Lotus Crush, which he reunited with in 2014 after The Voice.

McDermott said he decided to go on the show that finished in 2012 because he was told he had the chops for it and was in a place where he had the time. It was a year of his life he wouldn't give up, although the 16-hour workweeks were brutal. He has performed on stages worldwide, recorded with artists that include Blake Shelton, and his single 'Pictures' hit the top of the iTunes rock charts. He said his major influences have been The Who and the British rock band Dire Straits.

“I am excited to get back to Washington and hopefully put on a good show for people,” he said.

Aaron said the bash next month is part of a series of summer events hosted by Suley Era. The media group focuses on bringing people together from different artistic platforms, such as the fashion and music industries.

Camano Island native Meagan Kruz designs the Seattle-based Jersey Virago woman's clothing line. Her swimwear collection will be shown during the event. The pieces were recently walked down the runway at Seattle Fashion Week. Her newest work will be included in the fall Bellevue 2017 fashion week.

Also to be featured at the bash will be Suzanne Gwynn's nonprofit Ladybug House, which is working to build the first palliative care home for children and young adults in Seattle, Aaron said. It will be only one of a handful in the U.S., he said, and he wanted her to have a chance to get the word out.

Tickets can be purchased at this shortened link: bit.ly/2sEFoQD.

More in this category: « What’s Your Story Feeding the Soul: Hiba Jameel trained to be a nutritionist but painting sated her »